Importance of Diversity in Nursing

In the 21st century, the U.S. population is becoming increasingly diverse. One indicator of this development is the U.S. Census Bureau’s “diversity index,” which measures the chance that two randomly selected people will be from different racial or ethnic groups. According to the Census Bureau, the diversity index grew from 54.9% in 2010 to 61.1% in 2020.

The growing diversity of the population brings immense opportunity to enhance many aspects of society, and healthcare is no exception. Ensuring equity in healthcare is tremendously important in promoting positive health outcomes. Diversity in nursing is particularly critical because of the close relationships that nurses build with their patients and the sensitive nature of the healthcare that nurses provide. A nursing workforce that reflects the population it serves can only strengthen healthcare.

As a current or aspiring nurse considering a Doctor of Nursing Practice degree, you may be particularly interested in knowing the importance and benefits of diversity and nursing, as well as related statistics and initiatives. While there have been improvements in nursing diversity over the past few decades, there are still many more that can be made. 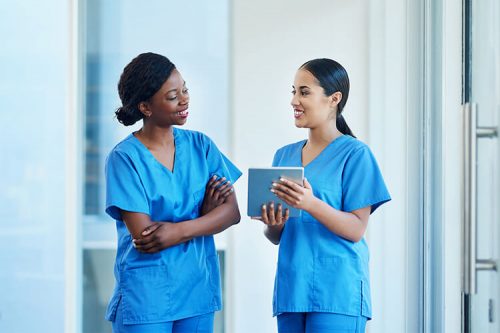 Why is diversity important in healthcare?

As patient populations become increasingly diverse, there’s a growing need for all healthcare professionals to treat and collaborate with patients from a culturally sensitive perspective.

The American Association of Colleges of Nursing (AACN) has made a number of important points about the critical role of diversity in nursing:

In addition, the National Advisory Council on Nurse Education and Practice has noted that:

According to the National Center for Health Statistics, a lack of diversity in the healthcare workforce is one factor that has contributed to poorer health and higher mortality rates among minority groups. Some patients feel more comfortable when their healthcare providers share their ethnicity, race, and language. Improving nursing diversity strengthens the trust between patients and nurses, which can lead to patients more strongly adhering to nurses’ recommendations.

A 2020 Nursing Forum article on the barriers to career advancement that African American nurses face highlighted the benefits of minority nurses’ ascending to executive roles in senior leadership. Specifically, representation at the executive level can give minority nurses the ability to influence the overall structure of the healthcare environment to reduce health disparities and improve patient outcomes.

How Diversity in Nursing Helps the Nursing Workforce

As a 2021 American Nurse report notes, a lack of nursing diversity can lead some nurses to feel isolated; it also can lead to misunderstanding and weaken a sense of community among nurses. It’s important for nurses of all races and ethnicities to have role models among nursing school faculty members, mentors who can demonstrate how they interact with patients and other medical professionals, and models of researchers who study underserved populations.

The effects of racism in the nursing workforce are profound. According to a 2021 study published in the Journal of Professional Nursing, minority nurses reported leaving employment because of racism they had experienced. They also reported that:

The study emphasized the importance of nurse educators’ role in modeling behavior and practice that new nurses can replicate as they begin their careers.

Where Does Diversity in Nursing Stand Now?

Statistics regarding nurse ethnicity show that ethnicity among nurses does not yet align with the ethnicity in the U.S. population, although the numbers are slowly shifting in some categories. According to the 2020 National Nursing Workforce Survey published by the Journal of Nursing Regulation, the four most represented ethnicities among registered nurses were:

Among licensed practical nurses/licensed vocational nurses, the four most represented ethnicities were:

Diversity in the nursing profession can provide much-needed sensitivity and understanding to the patient experience. In fact, the unique contributions of nurses from various backgrounds allows them to help advance the healthcare process by addressing patients in their native language or identifying cultural and religious sensitivities without unnecessary delay.

What Efforts Are in Place to Increase Diversity in Nursing?

In recent years, there have been ongoing efforts across various nursing programs to attract students from different backgrounds.

Campaign for Action, an organization founded by the Robert Wood Johnson Foundation, the AARP Foundation, and AARP, works to help people live healthier and longer lives by bolstering the power of nursing. One of the organization’s aims is to promote policies, programs, and best practices to ensure diversity in the nursing ranks. It also works to promote health equity and address systemic and institutional racism.

Another organization, Exceptional Nurse, strives to provide resources for nurses and nursing students with disabilities — who can often be overlooked when discussing diversity in the nursing profession. Breaking down gender stereotypes may be critical to drawing more men into the nursing workforce. There are dedicated support systems in place for male nurses, such as the American Association for Men in Nursing.

In 2018, the AACN formed the Diversity, Equity, and Inclusion Group (DEIG) to provide expert guidance to both the AACN and its member schools on ways to explore long-term, sustainable, and strategic goals that are designed to promote and support diversity in the nursing field. In 2021, that organization became the Diversity, Equity, Inclusion Leadership Network (DEILN), which furthers initiatives to improve inclusion, equity, and diversity in the nursing workforce and academic nursing.

What Is the Future of Diversity in Nursing?

The growing focus on diversity in nursing could help current and aspiring nurses develop a deeper understanding of how to support and engage patients from a range of different backgrounds. It takes brave leaders in nursing to help effect positive change in representation.

If you aspire to be a nurse leader and want to work to improve diversity in healthcare, explore Maryville University’s online Doctor of Nursing Practice. The program can equip you with the critical skills necessary to take on greater nursing responsibility and achieve professional growth. Start your journey toward an expanded role in the nursing profession today.

Future Trends in Healthcare for DNPs

Treating Patients in the Future of Medicine: What DNPs Need to Know

American Association of Colleges of Nursing, Enhancing Diversity in the Workforce

American Association of Colleges of Nursing, Race and Ethnicity of Student Nursing Programs

Journal of Professional Nursing, “The White/Black Hierarchy Institutionalizes White Supremacy in Nursing and Nursing Leadership in the United States”

National Advisory Council on Nurse Education and Practice, “Integration of Social Determinants of Health in Nursing Education, Practice, and Research”

Nursing Forum, “Barriers to Career Advancement in the Nursing Profession: Perceptions of Black Nurses in the United States”

U.S. Census Bureau, “2020 US Population More Racially and Ethnically Diverse Than Measured in 2010”