The complexity of our communication is one major aspect that separates human beings from the animal kingdom. We’re not the only species to interact with one another using sounds, facial expressions, and gestures, but humans communicate with complexity, using thousands of spoken languages, each containing thousands of unique words and sounds. We even can communicate in sign languages that rely on hand motions and facial expressions. 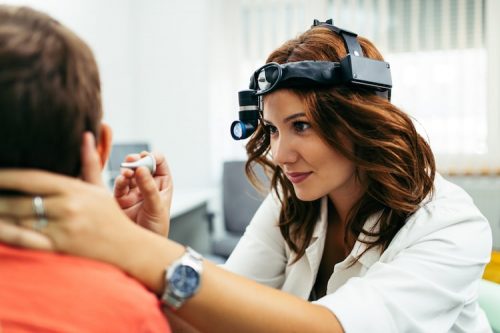 When people can’t communicate with each other, it can be a frustrating experience. Audiologists and speech-language pathologists focus on communication challenges — helping people manage and overcome disorders that affect how they interact with others. A look at the roles of audiologist vs. speech-language pathologist reveals many similarities, but there are also differences in their education paths, treatment areas, job training, and more.

What Is an Audiologist?

Audiologists are medical professionals who diagnose and treat issues related to hearing and balance, including tinnitus, hearing loss, vertigo, and noise sensitivity. If the diagnosed issue is treatable by a medical doctor, audiologists will refer their patients to an ENT (ear, nose, and throat) specialist; otherwise, they will explore options such as hearing aids and aural rehabilitation (the process of diagnosing different types of hearing loss and assessing how they might be treated).

A doctoral degree is necessary to practice audiology. Several undergraduate degrees can lead to advanced study and later becoming an audiologist, such as a Bachelor of Science in Communication Sciences and Disorders. Audiologists work in many occupational areas, including hospitals, doctors’ offices, and schools, and some work as independent contractors.

The outlook for those considering a career in audiology is optimistic. There were 14,800 audiologists in the U.S. in 2016, and the BLS projects that market to grow to 17,800 jobs by 2026 — a 21% jump, which is three times the projected average growth for all jobs during that same span. Currently, 24% of audiologists work in physicians’ offices, and 24% work in the offices of occupational therapists, speech therapists, and audiologists; 15% are self-employed, 12% work in hospitals, and 10% work in educational services. Those who worked in hospitals had the highest median annual salary ($81,120) in 2018.

What Is a Speech-Language Pathologist?

Speech-language pathologists work in a wide array of environments, helping people manage and overcome disorders of the mouth, throat, and tongue, many of which impact communication. Those in this role, which requires at least a master’s degree and certification, help manage symptoms stemming from issues such as Parkinson’s, a cleft palate, hearing loss, or a brain injury/stroke. They also help people overcome nonphysical difficulties, such as stuttering. Speech-language pathologists can work alone or in groups and are commonly found in educational services as well as in doctors’ offices and professional offices. In schools, a common work environment for speech-language pathologists, they help students with communication problems by coaching language use, fluency, and articulation.

Similarities Between Audiologists and Speech-Language Pathologists

As communication-related medical professionals, there are some commonalities in the backgrounds and skills of audiologists and speech-language pathologists. Both need to have strong interpersonal abilities, patience, compassion, and empathy. Both spend time working one-on-one with patients with communication difficulties, who are likely frustrated and discouraged by their issues. Audiologists and speech-language pathologists also both require advanced degrees in their fields, as well as professional certification.

Differences Between Audiologists and Speech-Language Pathologists

If you’re interested in a career that helps those with communication struggles, you should spend some time investigating the responsibilities of an audiologist vs. speech-language pathologist to pursue the path best for you.

While audiologists and speech-language pathologists both help others with communication, they focus on different areas of the body. Speech-language pathologists have a broader focus. Their treatment and analysis can involve almost any part of the body above the neck, including the ears as well as the eyes/visual systems, tongue, mouth, and throat. In contrast, audiologists have a narrower focus. Their treatment and analysis are limited to the ears and auditory canal.

While both career paths will benefit from the same early steps — such as a bachelor’s degree in communication and ample hands-on experience — they quickly diverge. Education is one of the differences between an audiologist and a speech-language pathologist.

Since 2012, audiology candidates have been required to possess a doctoral degree to attain the Certificate of Clinical Competence in Audiology (CCC-A), issued by ASHA, or to earn certification from the American Board of Audiologists. They must also pass the Praxis exam in audiology, issued by ASHA. The primary degree for audiologists is the Doctor of Audiology, but that’s not the only option. Aspiring audiologists can also earn a Doctor of Philosophy, Doctor of Education, or Doctor of Science, but they must complete the requisite clinical requirements to sit for the certification exam.

In contrast, only 10% of audiologists, or about 1,400 professionals, work in education. Instead, they tend to work in healthcare facilities, including hospitals, private practices, and community clinics.

Audiologist vs. Speech-Language Pathologist: Which Is Right for You?

Everyday Hearing, “What Everybody Ought to Know About Audiologists”

Maryville University, Bachelor of Science in Communication Sciences and Disorders